The Red Dzao (sometimes written Dao or Yao) is a hill tribe in Northern Vietnam. Their shamanism is mainly Daoist, but may also have elements of Buddhism. I have been fortunate enough to learn a little about their practices, added some from the web, and shown some artefacts I have acquired.

I will add to the information in this entry as I discover more.

So, how did the role of Shaman appear in the Dzao communities? Well, first of all they are not called ‘shaman’ but a title most closely translated as ‘sorcerer’. Here is a brief background:

Legend had it that Dao ancestors were living in mountainous areas when devils appeared, killing people, eating livestock and destroying crops, making life truly mournful. The Jade Emperor sent heavenly fighters to earth to kill them, who, however, could not wipe out the devils because they were too many. As earthly people without magic could not defeat these devils, the Jade Emperor asked deities to pass magic to male villagers and grant them the title “sorcerer.” These sorcerers together with heavenly fighters finally killed all evil spirits. After that, the Jade Emperor gave the order to grant the sorcerer title to married men who wished to protect people from evil spirits. Le cap sac was formed since then and exists till now.  The Cap Sac maturity ritual involves such feats as fire-walking.

Here are two examples of bibs worn by the sorcerers, the first having chest plates and bells which are both often features of shamanic costumes. They also wear a head-band with tassels which spin around to keep harmful spirits at bay.  The second one is traditional, worn during the Cap Sac ritual:

The sorcerers (or priests) carry a Court Tablet which is wand-like, sometimes ornately decorated, and is used similarly to a phurba in Himalayan shamanism, to direct energy and to summon and control spirits. Here are two I own:

Divination is also a key function of the sorcerer.  For this, a pair of crescent-shaped ‘Cau’ wooden or bamboo ‘chops’ are used.  They are thrown to the ground and an interpretation is made based on which way up they land and their position relative to each other, giving many combinations of up, down, towards, parallel, away etc. Here are two sets I own, one wooden and one bamboo:

Here is an explanation of a similar Chinese practice from Wiki:

From Wikipedia, the free encyclopedia

A set of jiaobei blocks in Yueh Hai Ching temple

Jiaobei blocks or moon blocks (筊杯, jiǎo bēi, lit. “bamboo cups”) are wooden divination tools originating from China, which are used in pairs and thrown to answer a yes or no question. They are made out of wood or bamboo and carved into a crescent shape. Each block is round on one side (known as the yin side) and flat on the other (known as the yang side). It is one of the more commonly used items found in Chinese traditional religion and are used in temples and home shrines along with fortune sticks, both of which are often used together when requesting an answer from the gods.

Jiaobei blocks can be used separately to receive a straightforward answer, or they are accompanied by fortune sticks to clarify an oracle. When used alone, jiaobei blocks are first purified by revolving the blocks around the incense burner three times. The querent then kneels and says their name, date of birth, residence, and question while cupping the blocks between their hands in prayer. After the querent poses the question to the gods, the blocks are dropped to the floor and land in a specific position. 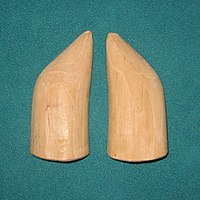 There are four possible answers that the jiaobei blocks can produce:

When used alone without the fortune sticks, the blocks are thrown three times in order to maintain accuracy of the deity’s answer.

Aside from questioning the deities on mundane affairs, jiaobei blocks are also used to verify a range of issues, such as proper ritual protocol, spiritual presence of the gods or if they have eaten the offerings presented to them.

One of my Court Tablets has an inscription engraved, which is that of the deity called Official of Water, so probably allied to ancestor or ghost rituals. At the base of this post is an explanation of the Daoist deities, pasted from a source I will attribute later:

A wonderful site with amazing pictures from an exhibition of The Art of the Shaman in Vietnam & South China:

How to Make the Universe Right: The Art of the Shaman in Vietnam and Southern China

An explanation of Daoist Deities:

The Taoist doctrine holds that the three basic elements that generate everything in the universe are heaven, earth and water, namely, “San Yuan(三元)”(three elements), which are also known as “San Guan(三官)” (Three Officials), meaning, the section produced during the flowing process of time and space. They are manifested as the Three Great Official Emperors ( 三官大帝 San Guan Da Di), also known as Officials of Three Realms (三界公 San Jie Gong). Their positions are only second to Great Jade Emperor (玉皇大帝).

Earth(地官 – Di Guan) – Lord Qing Xu (清虚大帝)
The Official Of Earth (地官 – Di Guan) named Lord Qingxu (清虚大帝). He was born on 15th day of 7th Chinese Lunar Month, which is called Zhong Yuan Festival (中元节) or Zhong Yuan Di Guan Festival (中元地官节). His duty is to inspect the good and evil deeds of Human Folks on Earth and whether to bring fortune to the worthy person. He may pardon sins on those human folks and those who pass on who did wrong.

Official Of Water(水官 – Sui Guan) – Lord Dong Yin (洞阴大帝)
The Official Of Water(水官 – Sui Guan) named Lord Dongyin (洞阴大帝) was born in 15th Day of 10th Chinese Lunar Month, which is called Xia Yuan Festival (下元节) or Xia Yuan Sui Guan Festival (下元水官节). He is in charge of the matters happening in the nether world, access the good and bad deeds of the spiritual beings waiting for rebirth. His duty also includes dispelling misfortune of human folks on earth.

During these three festivals, the three officials would descend upon earth in their respective festival to execute their duties.